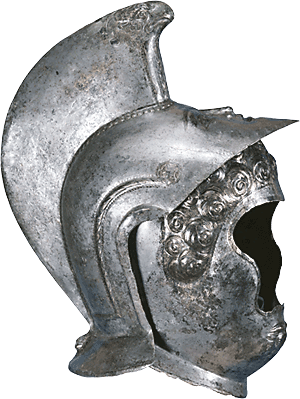 The nave of the Karmeliterkirche is dedicated to the Roman era. This section, reordered in 2005, shows for the most part finds from the Roman town of NIDA (Frankfurt-Heddernheim).

The history of this central place in the area behind the Limes border begins during the rule of Emperor Vespasian (69 – 79 A.D.) with several military camps. After the departure of the troops, it developed into the civilian capital of an administrative area (civitas) in the second century. At the beginning of the third century, the town experienced a late flourish, as is evidenced by the construction of an imposing town wall, stone extensions to the buildings and the erection of numerous funerary monuments.

Following the increasing pressure of Alemannish tribes to the right of the Rhine around the middle of the third century, the population gradually abandoned the town – it turned into an area filled with ruins, which in the early Middle Ages was no longer inhabited. In the 20th century, the area was completely built over with housing estates.

Finds from more than a century's worth of excavation activity in what was once the richest archaeological site in Hessen offer an instructive cross-section through everyday life, administration, crafts and religion in a Roman town. The tour begins with the completely reconstructed equipment of a Roman cavalry soldier from the period around 100 A.D. and ends with finds from the last decades of the civilian settlement around NIDA. Beside first and third century helmets, the unique collection of religious momuments from places of worship dedicated to the god Mithras, and the group of Jupiter columns are particularly worth seeing.

A further central theme is Classical architecture, a room with original frescoes is at the centre of this. 29 paint pots, complete with ancient pigments, number among the objects found in the well-known painter's grave.