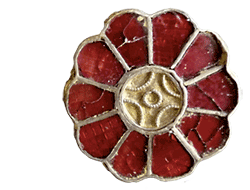 The early Middle Ages: the era of the Alemanns and Franks (3. – 7. C. A.D.), is well-represented in the Lower Main region by finds of graves with rich grave-goods. A small but representative selection is displayed in the nave, continuing on from the Roman period. The items illustrate the decline of Roman domination east of the river Rhine from 260 A.D. and settlement by the Alemanns and Franks.

In St Anne's Chapel we present the archaeological development of Frankfurt city (Domhügel), from the Neolithic age through Roman times to the Middle Ages. In the centre is the princely grave of a Frankish girl discovered under the Cathedral, and the Carolingian and Ottonian imperial palace : the germ-cell of what later becomes the City.

Beside minor finds, one can see a segment of a Roman distribution reservoir, portions of the wall of the royal hall and of the oldest city wall, as well as a model of the 9th century imperial palace.

The burial vault under St Anne's chapel (Annenkapelle) is entitled "Heathens and Christians". Religion and supersitition from the 5th to 8th centuries, and the changes in beliefs, are represented by heathen and christian amulets; early-Byzantine sacred objects illustrate the influence of the Mediterranean on christianity north of the Alps. In addition, grave-goods dating from the early modern period, found in the Carmelite church itself, are displayed in the vault.